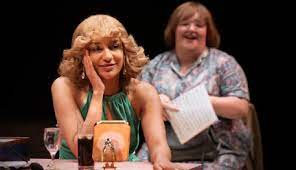 Originally debuting at Sheffield’s iconic Crucible Theatre, Victoria Wood’s 1978 play (written for longtime partner Julie Walters) is back at its theatrical womb. In true 2021 style, I bought an online ticket to watch it LIVE from the comfort of my working-class council estate maisonette. It seems fitting somewhat. I could almost be in one of Victoria Wood's famously funny, if not inherently sad monologues, about northern lives and those stuttering disappointments. The reality of being spirited with ambition, yet deprived of it through piss poor circumstances. As the rest of the country watches the football, I am glad to apart from the crowd and watching live theatre (minus crowds, ironically). As I say, the play seems fitting somewhat. Unlike my previous online theatre experience from a few weeks ago (Hushabye Mountain by Jonathan Harvey - Hope Mill - Manchester), I'd had neither read nor seen the original TALENT production, so I write this with absolutely fresh eyes! I rarely do this - an unbiased review is usually the most honest and easiest to write. 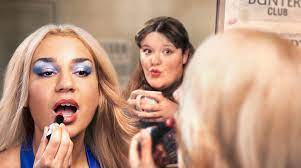 TALENT contains a plethora of hallmarks that are undoubtedly present in Woods’ future writing successes - and those wonderful songs are the stars of this show. Victoria Wood had a remarkable talent for creating those working-class characters, warm humourful dialogue, with a whimsical if not slightly sad undertone. Social commentary with pathos, you might say.TALENT is the story of Julie Stephens the 'little girl with the big voice', a young office worker who has passed an audition for a shot in a talent contest, hoping to be on New Faces (Woods drawing from experience here).

Arriving at Bunters Nightclub with the score for Cabaret, Julie and her friend Maureen reside backstage, often interrupted by fellow performers. In this production, Julie (originally Julie Walters) is portrayed by actress Lucie Shorthouse, who I watched just last week in an online performance of ‘Everybody’s Talking About Jamie’. The Sheffield connection remains strong there too!, that production was also born at The Crucible before becoming the West End phenomenon. Shorthouse plays the Julie Walters role with aplomb, bringing a certain vulnerability, pathos, and a fantastic vocal range. Of the show's 6 songs (accompanied by a solo pianist raised about the stage), ‘14 again’ was the standout for me. Wood's recognisable melodies and strong lyrics are suited perfectly to the piano, and that's what I remember most from her TV shows of the 1980s. 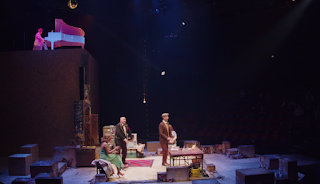 The set of the  1970s Bunters Club backstage area is deliberately drab yet the first hour of the show is rather joyous and upbeat. However, the atmosphere shifts when the organist (Julie's ex-boyfriend) and the Club compare characters appear to be typical men of the era. Both cads with history, the sexism that follows transcends the decades particularly well, in this modern age of identity politics and the polarising battle of the sexes. Julie’s best friend, Maureen played by Jamie-Rose Monk (originally Victoria Wood’s role), played for laughs, has an incredible singing voice and was arguably the standout of the shows ensemble cast. The comedic duo of James Quinn and Richard Cant as the old-school music hall duo added little, other than maybe reminding us that this is an original play from the 1970s and some content is easily lost. The fact that Julie is ultimately going to fail in the fixed talent contest, and doesn’t even perform, was surprising, for somebody who hasn't seen the show before, but I think that was the point. The TALENT is always there, it's what you do with it that matters.

An enjoyable performance, albeit one that could have benefited from an interval, this production was supported by the Victoria Wood Foundation and directed by Paul Foster.

Watching via Livestream may well reduce the atmosphere of being in a live theatre but, the images were clear, the sound was good, and the captioned option helped my ears a lot. Is live streaming going to be additional revenue for theatre? You would hope so - they will surely need it. This revival at the Sheffield Crucible was definitely worth £15. 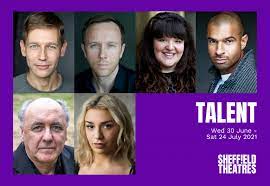 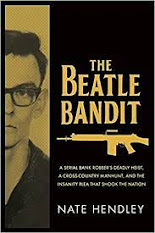