Inside 10 Rillington Place: The untold horror of my life with a serial killer 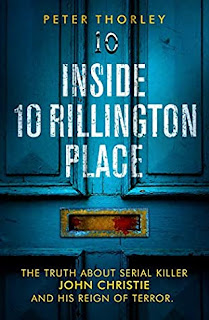 If you think of the ‘House of Horrors', the term is now synonymous with the heinous decades' long crimes of Fred and Rose West. A collection of young women systematically abused, mutilated and murdered, then disposed of  - all at one address. Not a haunted house, nor simply a den of iniquity, a true House of Horrors. These addresses slip into the UK true crime vernacular and become common parlance upon true-crime experts. We know all about 25  Cromwell Street, but what about 10 Rillington Place?.


Well, it's a true crime I am familiar with, a film I'm familiar with and various books having been written about Reginald John Christie, the back street ‘abortionist’ who murdered  8 women (at the very least). Some he buried in his garden, while others he stashed beneath his floorboard, or hid away in a secret alcove in his kitchen. A serial killer at a time of great depravity, just after a world war, and London post blitz was certainly a place of penniless poverty and crime being opportune and easy to commit. It’s a place where this book begins in the late 1940's of central London and it's a time that is often forgotten. Peter Thorley's personal account of the murder of his sister, is certainly a record to set the story straight.

Although murdered at the address, Beryl wasn't murdered by serial killer John Christie, it was at the hands of her alcoholic, and violent husband, who had strangled his wife, also suffocated his 13-month-old baby daughter. Historically, as it was at the same address, some speculated that Timothy Evans (hanged for the crime in 1960) wasn't the innocent party. So much so that he was posthumously pardoned and his sentence was widely condemned as a miscarriage of justice - but was it?

Being a first-hand account it, Peter was obviously devoted to his elder sister and had often visited his sister at the address, Peter gives a rather interesting impression of serial killer Christie. The memoir does little to dispel any of Christie's countless murders but does paint him in a different light, slightly. Peter disagrees that Christie killed his sister and with Timothy Evans being described as a womanising simpleton, a serial pathological liar, with drunken tendencies, the book explains in great detail and, not a character assassination, but what I would ascertain as the truth. It would be so easy to label Christie as the murderer of Beryl Evans and her daughter, the hanging of Timothy Evans even helped abolish capital punishment, however, contrary to popular belief and the British judicial system,  I think he most certainly killed his wife and daughter.


A house of horrors it may have been,  but a miscarriage of justice, this was particular murder, was not.

A must-read for any true crime fan.

Inside 10 Rillington Place: The untold horror of my life with a serial killer is published by mirror books and is on general sale now.