Aftermath Life in the Fallout of the Third Reich, 1945–1955 by Harald Jähner 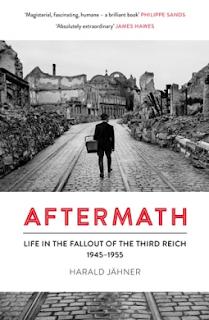 Germany, 1945: a country in ruins. Cities have been reduced to rubble and more than half of the population are where they do not belong or do not want to be. How can a functioning society ever emerge from this chaos? The book’s blurb gives an in-depth account;

In bombed-out Berlin, Ruth Andreas-Friedrich, journalist and member of the Nazi resistance, warms herself by a makeshift stove and records in her diary how a frenzy of expectation and industriousness grips the city. The Americans send Hans Habe, an Austro-Hungarian Jewish journalist and US army soldier, to the frontline of psychological warfare - tasked with establishing a newspaper empire capable of remoulding the minds of the Germans. The philosopher Hannah Arendt returns to the country she fled to find a population gripped by a manic loquaciousness, but faces a deafening wall of silence at the mention of the Holocaust. 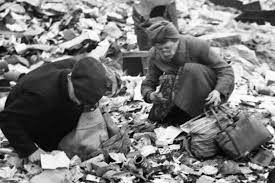 Featuring stunning black and white photographs and posters from post-war Germany - some beautiful, some revelatory, some shocking - Aftermath evokes an immersive portrait of a society corrupted, demoralised and freed - all at the same time.

Aftermath is a fascinating historical account of post-war Germany; told through politics, art, journalism, sociology, and from eye-witness accounts of how nazification continued to trouble Germany for many years following the war. It's a torrid and at times graphic account, lengthy, of Germany's fraught political history, and one we quite enjoyed. If you don't like history, I would avoid it, as it's not a true crime book.