The Road to Jonestown: Jim Jones and Peoples Temple by Jeff Guinn. Revolutionary Suicide or Mass-Murder? 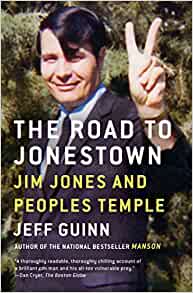 The Peoples Temple Agricultural Project, better known by its informal name "Jonestown", was a remote settlement in Guyana, established by the Peoples Temple, a San Francisco-based cult under the leadership of demagogue god-like narcissist (and Temple Leader) Jim Jones. On November 18th 1978 Jim Jones instructed his 900+ followers to kill themselves and commit ‘revolutionary suicide’ as a direct response to the Guyanese and American Government investigations into his cult-like Peoples Temple. What followed was the biggest act of mass-murder suicide in American History (before 9/11) that cemented Jim Jones and his cult into true-crime history books, alongside Waco leader David Koresh, and to a lesser extent, Charles Manson.

The Road to Jonestown: Jim Jones and Peoples Temple by Jeff Guinn, is a definitive and exploratory look into the world of Jim Jones. How did this poverty-stricken kid from Indiana become a faith leader, political activist, and ultimately a mass murderer? I won't give the game away but this is a very well written book, that gives a fascinating insight into The Peoples Temple - from its humble beginnings to the mass suicide/murder that made international headlines. In the years that followed this atrocious act, Jim Jones was compared to murderous demagogues such as Adolf Hitler and Charles Manson. These comparisons completely and historically misrepresent, the initial appeal of Jim Jones to members of the Peoples Temple.

Jones was a cult leader and a man who professed messages of love as a brotherhood. He had a convincing socialist idealism that appealed to his followers, but it was one that ultimately killed them all when his plan seemingly failed. If you’re unfamiliar with The Peoples Temple, this is a good book to start. Having read it, I'd be interested in learning more about cults and how they came to be. 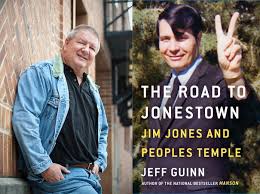 Jeff Guinn is a former journalist who has won national, regional and state awards for investigative reporting, feature writing, and literary criticism.

Guinn is also the bestselling author of numerous works of fiction and nonfiction including, but not limited to: Go Down Together: The True Untold Story of Bonnie and Clyde (which was a finalist for an Edgar Award in 2010); The Last Gunfight: The Real Story of the Shootout at the O.K. Corral - and How It Changed the West; Manson: The Life and Times of Charles Manson; and The Road to Jonestown: Jim Jones and Peoples Temple.

Learn more about The Peoples Temple