SIGNS OF MURDER by DAVID WILSON 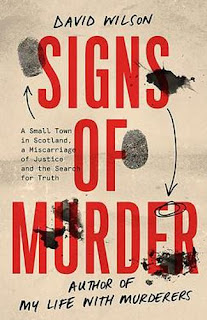 Miscarriages of justice are ripe for crime literature, biographies, memoirs and case studies. We are all familiar with high-profile cases, such as Barry George’s conviction for the murder of Jill Dando, the infamous ‘Guildford four’ whose sentences were quashed, and then there’s Timothy Evans, the latter being a case we have studied via two books reviewed on this very website.

So what is a miscarriage of justice?

The term 'miscarriage of justice' generally applies when a person is convicted of a crime but later their case is re-opened and their conviction is found to be 'unsafe'. But some cases are never reopened and a conviction stays, regardless of however long a prison term is served.

What happens if a case is deemed ‘unsafe’ though, but it’s never reopened? None of us would wish for crime to happen on our doorsteps but for Professor David Wilson, a historic case in his hometown of Carluke in Scotland, meant returning to his old haunts to investigate the 1973 murder of Margaret Mclaughlin and one in which an innocent man was jailed?

Visiting this case for the very first time, I was fascinated to read about George Beattie and his wrongful murder conviction which sparked the writing of this book. Was it a miscarriage due to an incompetent policeman William Muncie – one of Carluke’s most famous sons – secretly capitalising on his reputation as ‘Scotland’s top detective’? The case for George Beattie’s innocence is compelling and in this book, David Wilson investigates all angles. Rather than being a vigilante, engaged in a witch hunt, or interested in listening to idle gossip, David Wilson reviews this unofficial cold case review as you would expect. If you've seen any of his true-crime TV shows or documentaries, you will know what I mean. Based in England, we had no idea of this case and having read the book, we feel duly informed.

The investigation itself is incredibly good, the only slight I would say is that you David Wilson could be biased in his assumption that George Beattie is innocent, having been immersed in the case since childhood. He does investigate another possible local suspect though, and I think if he's correct - this book may have a sequel. I won't spoil it, but it still makes for a fascinating read