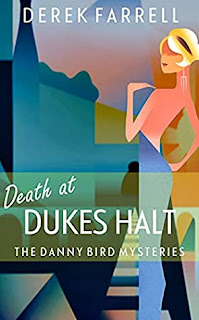 Nobody at Dukes Halt is who they appear to be...

A murder mystery weekend at a country manor, you say? Yep, that's right. Although the crux of this book is quagmired in a classic noir cliche format, the modern contemporary setting does give this book a certain edge. Danny Bird is our protagonist. A barman/amateur detective, who ( although seemingly runs a rough pub), is very well connected with the local landed gentry. Upon invite from his posh friend Lady Caroline De Montfort (or Caz for short), Danny Bird is whisked to the palatial country manor house of Dukes Halt, for a long weekend with an elite bunch of guests who are full of surprises. It's a sprawling 18th-century mansion with a (convincingly written) dark atmosphere. Before you know it, three guests are dead, guns fire, fireworks explode, there's a diamond heist, ghosts of the past, and a plot that twists and turns at every opportunity. The chapters are short, the narrative is fast-paced, and for a murder mystery, there's even a few contemporary modern subplots that could entertain readers of any age - especially in this post-truth modern identity-politics era. I shan't spoil it, but one of the party guests is a letchy politician with seedy intentions - very clever stuff. This novel contains an air of Noel Coward and Oscar Wilde in style, and as I read it, I imagined it would make a great radio play.

Derek Farrell is a writer that's new to us but one we would happily read again. In fact, this is actually #5 in the Danny Birds series of books so expect more reviews to follow! 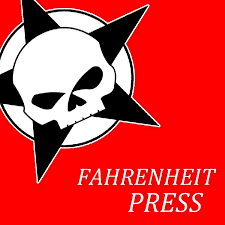 I've always been a fan of Fahrenheit press, which publish a lot of crime-noir, and this is an out-and-out classic contained in their back-catalogue!

Huge thanks to The Crime Book Girl for the competition tweet and to noir publishing giants; Fahrenheit Press.