The Beatle Bandit by Nate Hendley. Happiness Is A Warm Gun? 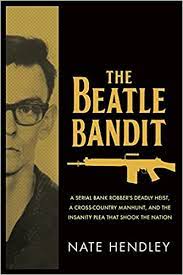 The Beatle Bandit by Nate Hendley is a comprehensive deep dive into a gun-toting one-man crime spree from 1964 by Matthew Kerry Smith. Due to his bank-robbery attire, Smith was dubbed 'The Beatle Bandit' by the Canadian media, but as a solo artist, Matthew was quite a successful bandit, albeit for a few troublesome civilians that were killed whilst he carried out his crimes!

In an interesting criminal character analysis, Nate Hendley takes apart the robber's personality. Matthew Kerry Smith was a bright but mentally disturbed, who launched his bank raids as some misguided attempt to galvanise the public, begin a revolution, and (laughably) overthrow the government. Funny, if it wasn't for his victims. One in the particular victim was military veteran Jack Blanc, who's died in a gunfight with the robber. Following a manhunt, Smith was caught, jailed and given a death sentence. When police searched his home, Smith had an arsenal of personal weapons and even gained a small property empire from his proceeds of crime. The crimes themselves gained media attention and caused Canadian gun laws to be revised. 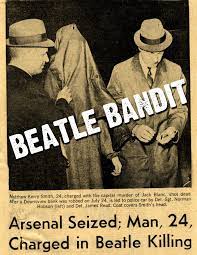 The book's narrative is founded on court transcripts, police documents, extensive first-hand interviews, media accounts, and other sources.  Nate Hendley tells this story brilliantly, and as a fan of The Beatles, it wasn't a case I had heard of. It's an interesting sell on the story but as a reader of true crime, I am well aware of the monickers the media give to serial killers, murderers, & even terrorists (the ISIS Beatle bombers springs to mind) Nate Hendley is a great storyteller and tells this true crime story as it should be; facts, stats, first-hand witnesses, and news reports of the time. Nate  Hendley is a journalist and author. His other books include The Boy on the Bicycle, The Big Con, and Bonnie and Clyde; A Biography. All worth checking out, I think!

Thank you to NetGalley UK for review approval! 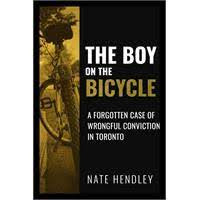