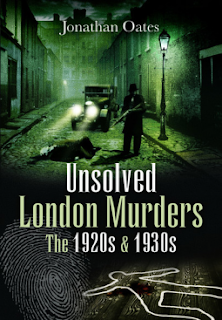 Unsolved London Murders is a compendium of 20 true crime stories of ALL unsolved murders across London in the 20s and 30s in all of their macabre horror, mystery and real-life barbarism.

Meticulously researched, the prose is strong, readable, and incredibly descriptive. All cases are unsolved and the murders described vary in modus operandi, reasoning, and at times, brutality.  From prostitutes, a heinous child murderer, the murder of London landlady, and a potential serial killer, the 20 cases featured also include post mortems, witness statements, police procedurals of the time, and a selection of location images. Overall this is an enjoyable look at murders committed during those brief intermittent war years.

Often delving into London’s seedy underbelly it is interesting to note that crimes of this nature did happen during the (often professed) more innocent times, and it’s an easy and fascinating read overall.