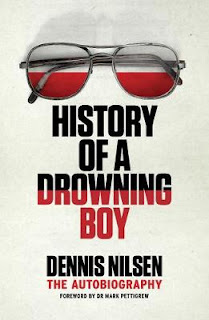 Narcissistic, introverted, insular, & paranoid; all hallmarks of a psychopath and by his own admission, Dennis ‘Des’ Nilsen displayed all of these signs by his early teens. Like most serial killers, Des has himself marked down as anal intellectual, a psychopath so warped with self-indulgence that upon being sentenced to life for the murder of 12 innocent men and boys, the institutionalised serial killer decided to write about his life and ‘struggle’ on the inside. Co-written with longtime confidante Mark Pettigrew, this book offers a remarkably fascinating insight into how those killings are comprehended and understood by the killer, first hand, and in retrospect.

From a young age, Nilsen has a macabre fascination with death and warped sexual fantasies which may or may not relate directly or otherwise to several cases of sexual abuse admitted on Denis as a child and young man. In childhood, his relationship with this grandfather, sexual abuse by him (we only have the authors word) and his death, seems to have marked the young boy with an ingrained perversion of passive male bodies and necrophilia. It’s a warped juxtaposition and one that subsequently, is the reason we are reading this book. As a young man, Des seems to start life quite respectably, 11 years as an army cook ( he became a trained butcher), and even a year in the police force, before settling for life as a militant civil servant. What’s striking throughout this book is that Nilsen explains his necrophilia fantasies, incest, and psychopathic tendencies with such blatant ease.

Little recognition (even in hindsight) of his heinous acts is quite astonishing considering that between 1978 and 1983 Nilsen murdered, mutilated, and dismembered 12 men picked up on London’s gay scene procured for his perverse sexual passions. Less ambiguous than Brian Masters ‘Killing for Company’, ‘History of a Drowning Boy’ is a curated collection of Nilsen’s autobiographical notes written whilst he was in prison and offers a frightening first-hand insight into the mind of the serial killer. Fresh off the back of ITV drama DES, this book is sure to fly off the shelves when published in February of 2020

Dennis Nilsen died in prison in 2018 and often fought the law to have his autobiography published whilst still alive, his level of narcissism was unbounded.