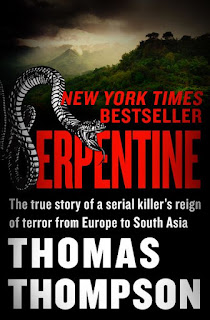 True Crime seems to be captivating TV audiences these days, and like never before. The latest offering from the UK has been the BBC crime drama The Serpent. I binged it in one week and was captivated by this exotic far-flung tale of a 1970’s serial killer, his murder spree, drugging, gem trafficking and poisonous reign of terror.

As always, I immediately downloaded the most popular book on amazon about the case and reviewed it for Vivalabooks!

Serpentine by Thomas Thompson tells the story of serial killer Charles Sobhraj, the notorious ‘Serpent’ or ‘bikini killer’ who preyed on Western tourists throughout the hippie trail of Southeast Asia during the 1970s. Joined by his band of ‘followers’ you could almost say that this murderer had a cult following, however, unlike Charles Manson, Charles Sobhraj was hands-on when it came to killing.

The book is a biography of Charles’ life from birth in 1944 up to his eventual capture and jailing in 1976. Over several months in late 1975 and early 1976, the French serial killer (although of Asian and Indian descent) murdered tourists on the ‘hippie trail’. During this period, bodies have been found slain, their corpses strangled and stabbed and burned and drowned, from the paradise beaches of Thailand, through to slopes of the Himalayas and besides the river Ganges. Sobhraj used a variety of aliases, usually from stolen passports, posing as a gem dealer to first extract money, but which (for reasons unknown) quickly escalated into murder. Maybe to cover his tracks or to keep the police from his trail, Charles had a femme fatale in tow (one of many) in French / Canadian Marie-Andree Leclerc, who acted as his wife, and an eventual accomplice (although she feigned innocence through trial). The book is a fascinating delve into The Serpent crimes, his heady band of followers, and analytically deconstructs his subsequent trial. 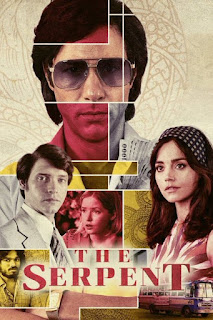 This book is the perfect accompaniment to the smash-hit BBC true crime drama and paints a portrait of a master manipulator psychopath who still resides in jail to this day.

About the Author; Thomas Thompson was an American journalist and author. He worked for Life magazine from 1961 and died in 1982.

Watch The Serpent on BBCiPlayer